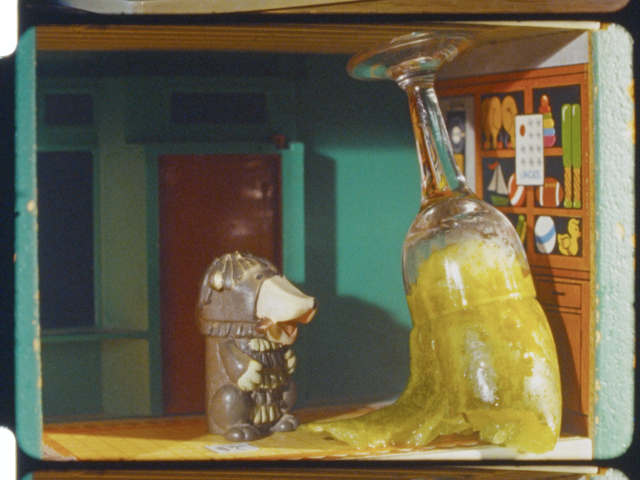 PRISME #5 comes to POL-N for an electrifying evening ! 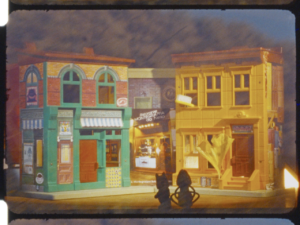 “Being home during lockdown inspired me to make this miniature sitcom set where every day something new happens; and to take the camera on walks. The absurd situations for the inhabitants of the filmset and myself result in this layered stream of images. The middle part is an uncut 3 minute roll of film that was scripted like a program: A 4-bit binary code and a long heximal code, written on paper, were used for positioning, layering and repeating what was filmed on this 30 meter.
Part of  this expanded cinema performance is to carefully dose sounds and visuals. Considering how much to show or let hear and what to omit. Subtly overloading our perception so our imagination goes to work. Looking inside rather then outside.

The performance starts with the laser beam being diffracted through soap bubbles in a glass. Two photodiodes translate the subtle (oil sliding swooshes) and crude (a bubble bursting) variations of light to stereo sound. After this, the modified 16mm film projector is started with a remote control, and I start playing live electronics. ” 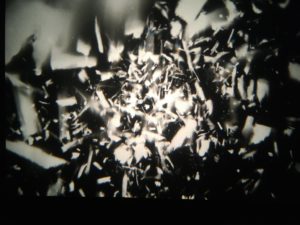 “An intimate exploration of the smallest of fireworks: the clac-doigt / pois fulminant, via 16mm black & white film projection, lathe-cut vinyl on turntables and live sound.

Melanie Clifford and Matt Davies bring a new work created specifically for Prisme 5 using photochemical film and analogue sound reproduction processes to delve into the moment of explosion and its consequences. The exploration begins with interaction of film with grains of translucent rock impregnated with silver fulminate, twisted in cigarette paper wrappers and held in protective sawdust. The brief flash at the instant of explosion darkens both silver nitrate and silver fulminate. Heat and friction both excite silver fulminate and are created by that excitation, and both affect film.” 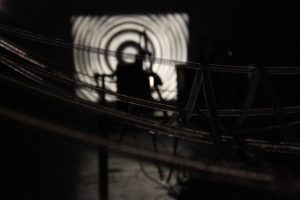 “we shall not cease from exploration and the end of all our exploring will be to arrive where we started and know the place for the first time” – T.S. Eliot

“An infinite line blurring time shows how image and sound can be intimately interlinked in a turbulent circularity that can lead to confusion. To achieve this premise, we built a device that helps us to recreate a space in constant change. Out of the frame, we’ll always find another frame to get rid of. ” 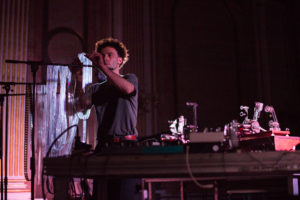 “Umbráfono is a project by Enrique del Castillo (Jaén, 1982) that consists of a performance with an optical reader capable of transforming light stimuli that are projected onto a photosensitive cell into sound. These luminous stimuli are generated by a beam of light passing through celluloid films which are designed from a scheme of relationship between wave frequency of
the notes and repetition of geometric shapes, so that harmonic sounds can be achieved. , noises, sound textures and atmospheres.

This project is based on the optical-analog reading system used in the cinema since 1919 to interpret the soundtracks that are part of the films. The read heads have been modified to read multiple voices simultaneously and to function as independent instruments. The pieces that make them up have been damaged and manufactured by the author, as well as the films used, which are original compositions without a copy.”