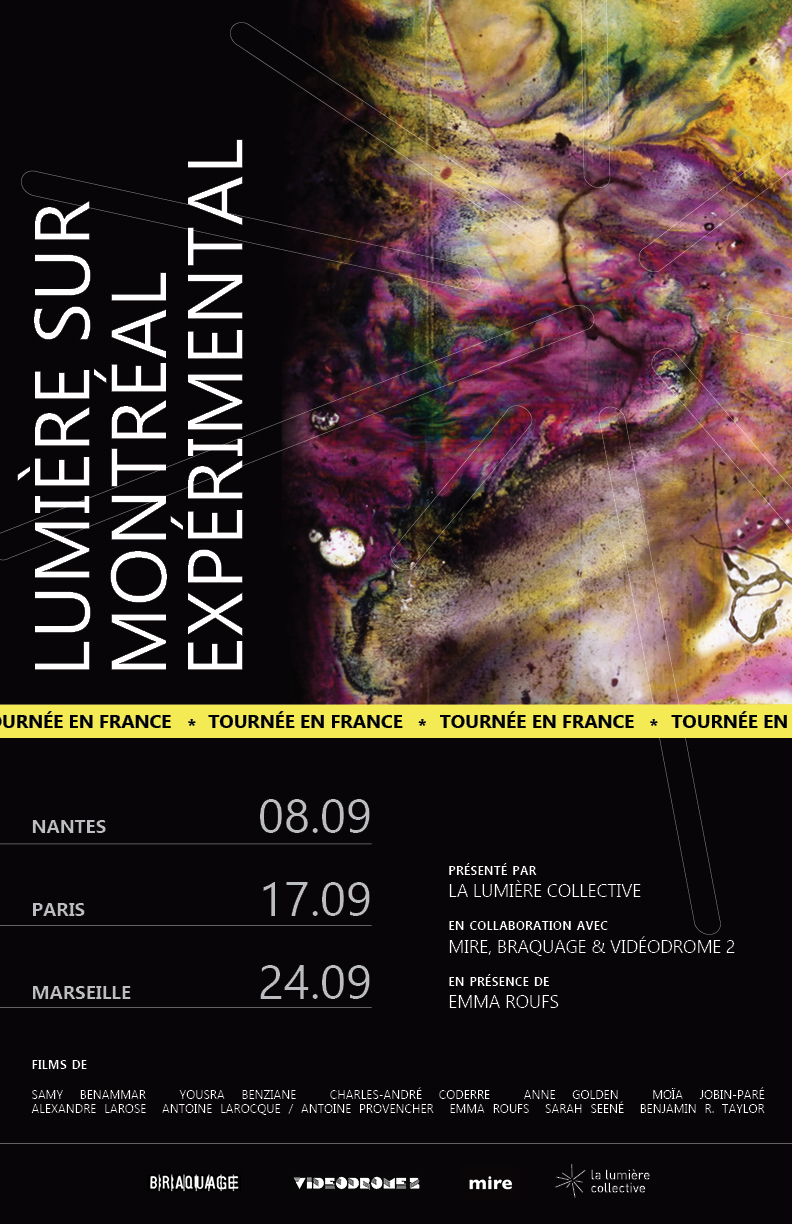 Mire has the pleasure of welcoming la lumière collective for a night of screenings highlighting the contemporary experimental cinema scene of Montréal !

Hosted by Emma Roufs, filmmaker and co-founder of la lumière collective, “Light on Montréal Experimental” consists of a program of shorts, each containing a certain visceral quality. These singular films allow us to question our rapport to architecture, to the body, to memory, to our environment as well as to the film and cinema medium. These artists, utilizing a large panel of production means(Super 8, 16mm, 35mm, photography, digital video, animation) reveal the richness of the artistic community of Montréal through the different approaches and exploratory practices they present here.

To the silence of the darkrooms succeeds the howling of the scanner resuscitating our sweaty embrace onto the film. From this caress, all that is left is the violence of an image; of your sex, a shadow; of our fluids, an emulsion, of our love, solitude.

Silence has suddenly disappeared sometime during mid-january 2019, following a traumatic event that took place a year prior. Ever since that day, occurrences of “white noise”, auditory scintillating and other dysfunctional frequencies follow me around like a juxtaposition of impalpable symbols of trauma.  This self portrait-film, shot in Super-8, illustrates the sensory chaos caused by what we name “permanent tennitus”, which falls under the typology of “ghost” pains, similar to a tireless current of sine waves that i have had to tame in order to define a renewed state of silence.

Nocturnal journey of an insomniac woman.

In a fragile and poetic balance between images from diverse sources, Thuya explores the territory where we have grown up as well as the way people live in it. This project was mainly done in a day of improvisation, at the random will of encounters and found images.

This project is inspired by a reoccurring dream in which i fall from the top of a structure while facing the sky. A few instants later, as I am highly anticipating the floor’s impact, the whole scenery unraveling in front of me transforms gradually into a sort of void. The dream changes trajectory and the collision with the floor never occurs.

A young woman sees and capture, develops and scratches. She restitches images. Mixed technique of a fragmented city.

Reminiscence of a trip to Beyrouth. The sea. The palm trees. The buildings. The elements melt under the batting of my eye lids. My memories now have their own life separate from my existence.

Nature and body at work throughout the course of a year, at once paralyzing and turbulent on foreign land. “In this place, memory is not only a fragment of the past bringing us back in time, it is a tangible object which makes us who we are in this very instant.”- RT