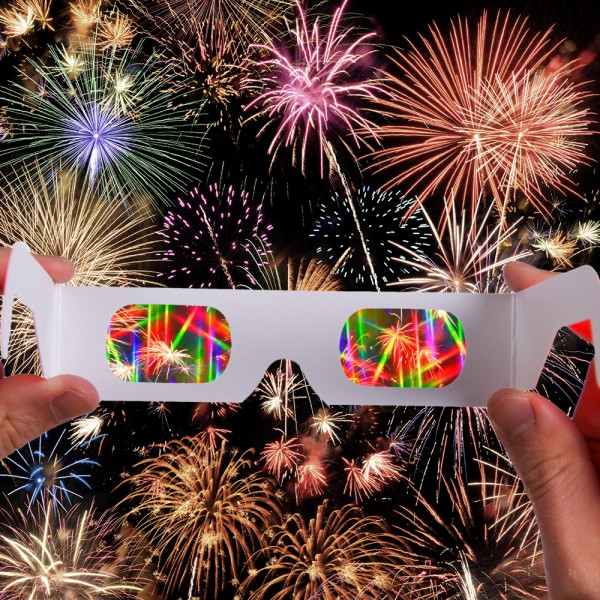 18h30 : Vernissage of the exhibition Vibrant Images – in presence of artists
+ fingers food by Mariane Moula !

Synopsis: Fireworks Indoors is a collection of eleven short films and videos to be viewed through 3D diffraction Fireworks Glasses™ (even if that was never the intent of their makers). The program was first presented at the 2017 Winnipeg Underground Film Festival, and features work from Canada, Austria, Germany, Japan, the United Kingdom and the United States. Various approaches to structural film and video making (as well as several transmedia experiments), augmented with specs designed to enhance fireworks, laser shows and holiday light displays, offer an enthusiastic introduction to the concept of fun formalism – a term first coined by Canadian filmmaker John Kneller to describe the work of Mike Maryniuk (whose 2011 video Thompson features here). Prioritizing wit and audience engagement, exploring transmutation and hybrid forms, Fireworks Indoors strives for the ecstatic, shaking off obedience to purism and much of the self-seriousness often associated with these forms. Unabashed visual consumption, high-contrast eye candy, trippy is good.

“Of course, I am not trying to reduce the complexity of the work by labeling it as fun formalism. There seems to be a misconception that once a work is fun, it becomes mindless entertainment. Under the moniker fun formalism, I am really referring to work that actively attempts to engage the audience. For instance, I would consider many of Michael Snow’s films examples of fun formalism.
In contrast, there are many serious works being made without any depth and curators have a tendency to justify this work as rigorous. In other words, they seem to equate work that is mind-numbingly boring with rigour. This might seem radical, but I believe it is the filmmaker’s duty to engage the audience by providing complex visual arguments and challenging ideas.” -Clint Enns

“You can’t show an abstract film to a non-abstract film audience without this word [trippy] coming up, without getting comments afterwards about how they needed acid to watch it or whatnot. So basically, I feel that this type of animation has been grouped along with this product packaging, and it’s almost impossible to work within this tradition without acknowledging that.” -Jodie Mack