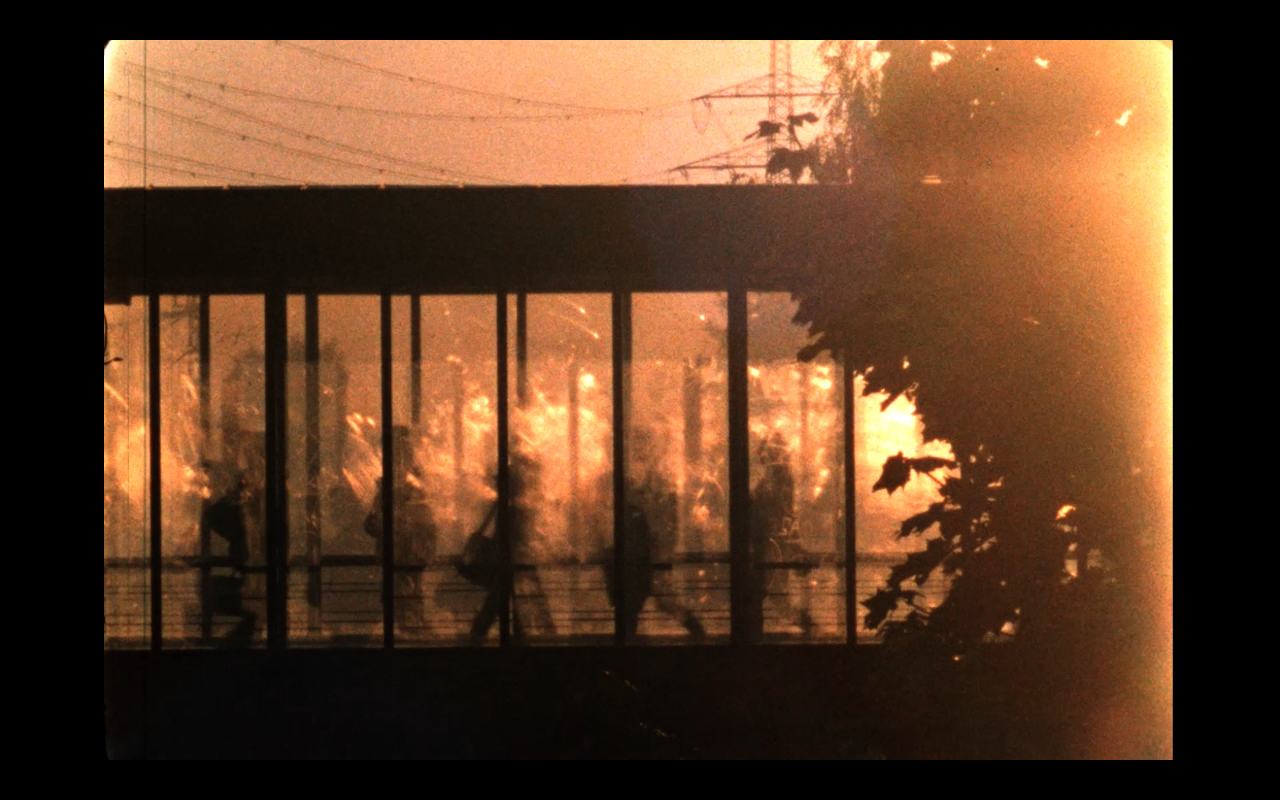 A series of visual strategies to reveal the nature of the photochemical image. The spectators’ perception plays a significant role within a series of films where the physical materiality of the celluloid is connected with the reflexive consciousness of the mind.
Celluloid as a means to see and apprehend the ineffable. Needle in the Sway ~ Roger Beebe, USA, 2015, 16mm, n&b, sound, 03’00
A meditation on childhood and (queer) desire using hand-processed, optically printed
footage of a boys camp outside of Austin, Texas in the 1950s.

26 Pulse Wrought – (Film for Rewinds) Vol. I Windows for Recursive Triangulation  ~ Andrew Busti, USA, 2014, 16mm, color, sound, 03’15
A travel from east to west and from west to east.
Reflecting on the setting Sun of the Winter Solstice, the crux of increasing light… seen thru apertures…setting over the Pacific. Yes it is here…it is here, where we are…

Round Trip ~ Philippe Leonard Canada/USA, 2014, 16mm > DCP, color, silent, 03’00
A diptych filmed on a journey between Montreal and New York City. My last roll of Ektachrome to commemorate an important day when two became unified in the act of giving.

Rode Molen ~ Esther Urlus, Netherlands, 2013, 16mm anamorphic blow-up to 35mm > 16mm, color, sound, 05’00
The starting point and inspiration for the film are the windmill paintings of Piet Mondriaan, especially Rode Molen. In the film color is created by multiple exposures through different masks during printing.

Konrad & Kurfurst ~ Esther Urlus, 2014, Netherlands, 2014, 16mm , colour, sound, 07’00
A fictional re-enactment of a 5 minute happening that took place during the Olympic games in Berlin 1936. Made on home brew emulsion and color toned with the helping hand of technical publications from early cinema and photographic experiments. The home brew emulsion as fragile metaphor for the heroism of Konrad and his horse Kurfurst. Falling from his horse he became a national hero but overtaken by history, an anti-hero.

Deep Red ~ Esther Urlus, Netherlands, 2012, 16mm anamorphic blow-up to 35mm > 16mm colour, silent, 07’15
Handmade with a DIY silkscreen printing technique. The starting point is a black and white hi-con film of trees shorn of their leaves. As if they are the reminiscent of branches seen flashing past in the night from the back seat of a car. Transformed into thirty six layers of deep Technicolor.

On the Invention of the Wheel ~ Richard Tuohy, Australia, 2015, 16mm, b&w, sound, 15’00
Ultra-short, 16mm sequence of a bicycle wheel turning becomes a repeating machine thanks to the power of the loop. Provides a glimpse of the world defined by the mechanical art of film. On the Invention of the Wheel becomes a metaphor for the ‘Homo mechanicus’.

ELEMENTS OF NATURE , DEVICES OF CINEMA

A programme inspired by the relationship between «nature» and experimental cinema. We swing through technical virtuosity and natural spontaneity.

Observando el Cielo ~ Jeanne Liotta, USA, 2007, 16mm, color, sound, 19’00
Seven years of celestial field recordings gathered from the chaos of the cosmos and inscribed onto 16mm film from various locations upon this turning tripod Earth. This work is neither a metaphor nor a symbol, but is feeling towards a fact in the mist of perception, which time flows through.

Travelling Fields ~ Inger Lise Hansen,Norway, 2009, 35mm > DCP, color, sound, 9’00
Travelling Fields is filmed in a number of locations in Murmansk and Monchegorsk in Northwest Russia. The film observes various topographies and architectural elements in the landscape. It is shot in places such as abandoned construction sites, a field by a factory and an empty car market.

Tender Feet ~ Fern Silva, 2013, USA/Portugal, 2013, 16mm, color, sound,10’00
Tender Feet was shot on the road in the southwest leading up to the not quite so cataclysmic and transformative events anticipated to take place around Dec. 21st 2012.
As digits flipped on the odometer, so did the days in the Mayan calendar shedding light and darkness on charred forests, arid landscapes, falling stars, destructive vortexes, fortune telling traffic signs, and ticking time bombs…

Trees of syntax, leaves of axis ~ Daïchi Saïto, Canada, 2009, 35mm, color, sound,10’00
Using the images of maple trees a the park as main visual motif, Saïto creates a film in which the formations of the trees and their subtle interrelation with the space around them act as an agent to transform viewer’s sensorial perception of the space portrayed. Entirely hand-processed by the filmmaker, Trees of Syntax, Leaves of Axis, with the contrapuntal violin by Malcolm Goldstein, is a poem of vision and sounding that seeks certain perceptual insight and revelation through a syntactical structure based on patterns, variations and repetition.

Snakegrass ~ Stephen Broomer, USA, 2012, 16mm, color, sound, 1’08
Snake grass lines a forest path. The camera passes toward the entrance to the woods. It staggers and repeats as the scene is saturated in colour.

Le Pays Dévasté ~ Emmanuel Lefrant, France, 2015, Super8 & 16mm > 35mm, color, sound, 11’30
– What do you see?
– A place not suited for humans being
Le Pays Dévasté relates to the anthropocene, the current geological age, viewed as the period during which human activity has been the dominant influence on climate and the environment.