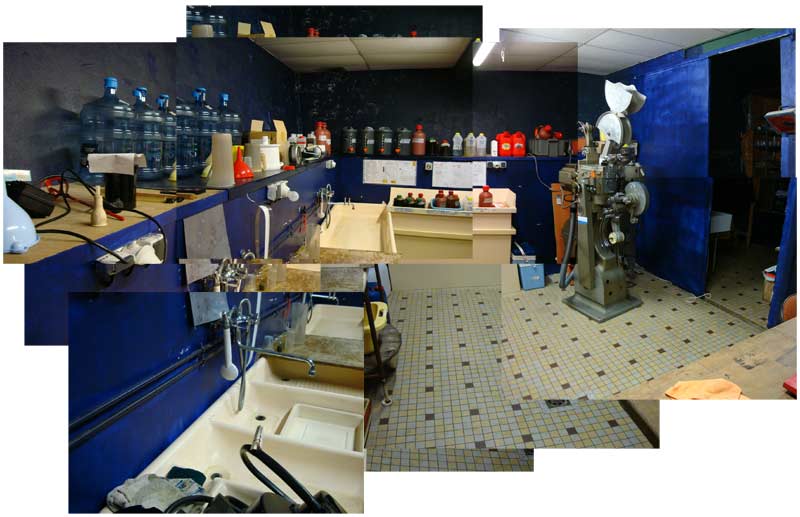 On the occasion of the official opening of the new lab (and of the RE MI project partners meeting), LaborBerlin invites Filmwerkplaats and Mire to present films made in their labs.

Collé-Serré, Carole Thibaud, 2013, / 16mm + digital sound / B&W / 3mn30
A musical 16mm film made for and with Sieur&Dame, an eccentric lyric pop band making a cover of the Lambada song. An epic alcoholic shooting that ended with a human pyramid in the street and naked table football games in a bar.
The film was totally printed and edited with our capricious JK optical printer.

L|R-introduction / Will Rifer / 2015 / 16mm /18fps/ silent / 2’10
2 Super8 reels from a stereostopic film transferred on 16mm film coated with 2 handmade emulsion coloured layers.
Made in Mire, showed during the Maddox seminar organized by L’abominable in Paris, october 2014.

Sillages#2 -Antoine Ledroit & Aurélie Percevault- 16mm – 5’20 – 24 fps– silent – 2014
A presence by an absence.
Condensation and repetition of the past, these fleeting moments captured and forgotten.

Untitled (24xH2o) redux (producer’s cut ) -Thomas Chatard + Antoine Ledroit – 35mm / sound (in SR if possible or MONO) / 5mn
Untitled (24xH2o) is an altered 35mm projection, all edited with original altered movie trailers.
Those distorted commercial frames reveal their materiality and take us to another cinematic environment.
Leftovers from original shots become sets for a new experience.
Fiction turns organic and rhythmical. Coming back to the magic, to the transparency of the original medium.
The screen finally looks like a disturbed and moving luminous painting celebrating the last jolts of a 35mm projector.